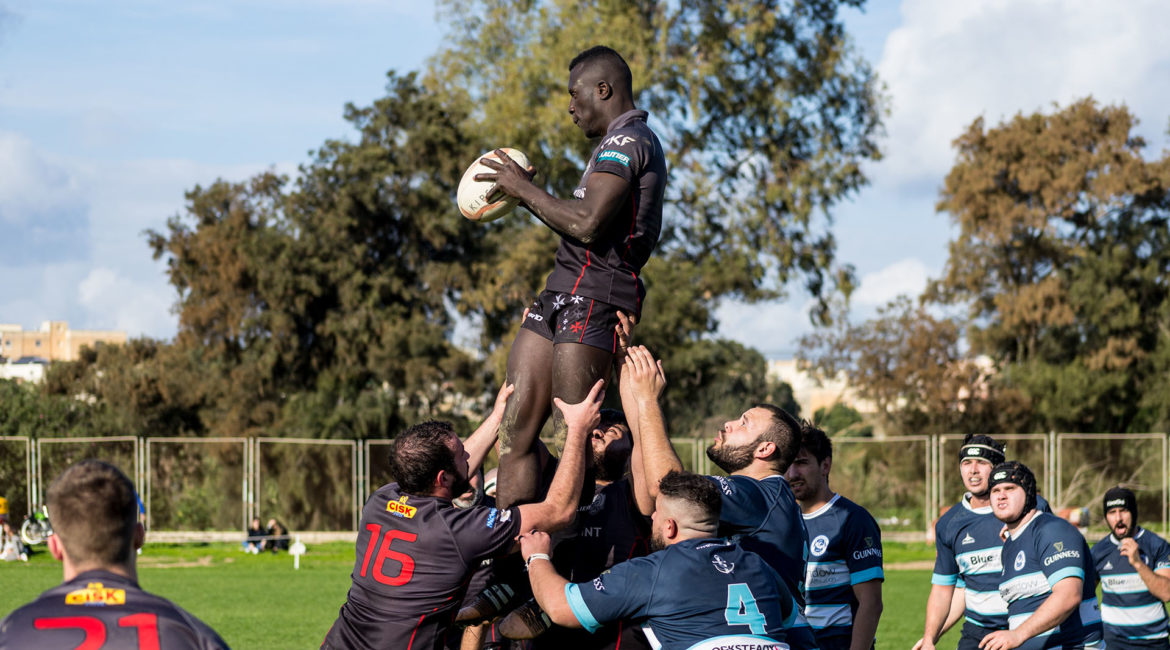 After several seasons of scraping together a team after many retirements of former players, Kavallieri are back, with a new Coaching team and some new faces in the ranks. Overseas were expected to win this game, but were missing some key players and so it was anybody’s game.

Overseas playing with the wind in the first half, just could not break down the well organised Kavallieri defence, that forced them into mistakes with dropped passes and poor kicks for territory going too long.

Kavallieri scored first after a break down the line by the speedster Mhiripir(14) who then offloaded to the flying prop Max Micallef to score in the corner.

Darren Edwards(10) was controlling the pace and direction of his runners, offloading to Terence Galdes(3) and Branton Bonello(4) charging it up or swinging it wide to bring Mhiripir into the game.

Overseas hit back drilling the ball into the corner from a penalty, a catch and drive that stalled then delivered the ball through the hands to Daniel Gauci (11) to score out wide.

Both forward packs were having a right old tussle fighting for supremacy, Overseas shunted the Kavallieri pack backwards several times, but the Kavallieri loose trio, lead by the impressive Ousmane Konate(7) were winning turnover ball in the tackle area.

Kavallieri scored again out wide with Joseph Cutajar(8) touching down at the back of a maul from a lineout.

The half time score stood at 10 to 5 in Kavallieri’s favour.

Overseas poured on the substitutes in the second half trying to up the speed of their game, but they had to defend their own line for a period of 10 minutes, as Kavallieri laid siege to their tryline. It was a stout Oversea’s defence that kept them out, but also at times poor communication and handling mistakes by Kavallieri.

The first foray into Kavallieri’s half had Overseas scoring after a fine run by Michael Scott(12) and Roderick Borg(14) for Vince Stivala to touchdown and with the conversion by Aidan Grech(10) taking the lead at 12 points to 10.

A loss of concentration by Overseas after their try, allowed Kavallieri to hit right back with a run down the middle by Mhiripir, but finally he was slammed into touch with a fine tackle by Scott. But then Heatley(15) bounced his way through two tackles to score after a maul near the tryline, to take back the lead with the Edmund’s conversion, making it now Kavallieri 15 to Overseas 12.

Overseas had a golden period with the ball in hand and looked like they had finally shrugged off their shackles, as they went through phase after phase with John Debono(4), Luke Galea(7) and Postma(19) all carrying strongly, finally putting Gauci in for his second try taking back the lead at 17 to 15.

But Kavallieri bounced back with a long range penalty by Edmunds, from out wide and on the 10 metre mark, judging the wind perfectly to take back the lead again at 18 to 17!

A Red card to Oversea’s Duberne(6) for a combination of a late tackle, then walking off the field, not obeying the Referee Sean Doublesin, probably squashed the Overseas comeback and to add insult to injury Kavallieri scored again with Edmunds (10) twisting and touching down from a ruck, converting his own try, with the Referee blowing for full time, Kavalleiri began to celebrate their comeback with a fine 25 to 17 win.