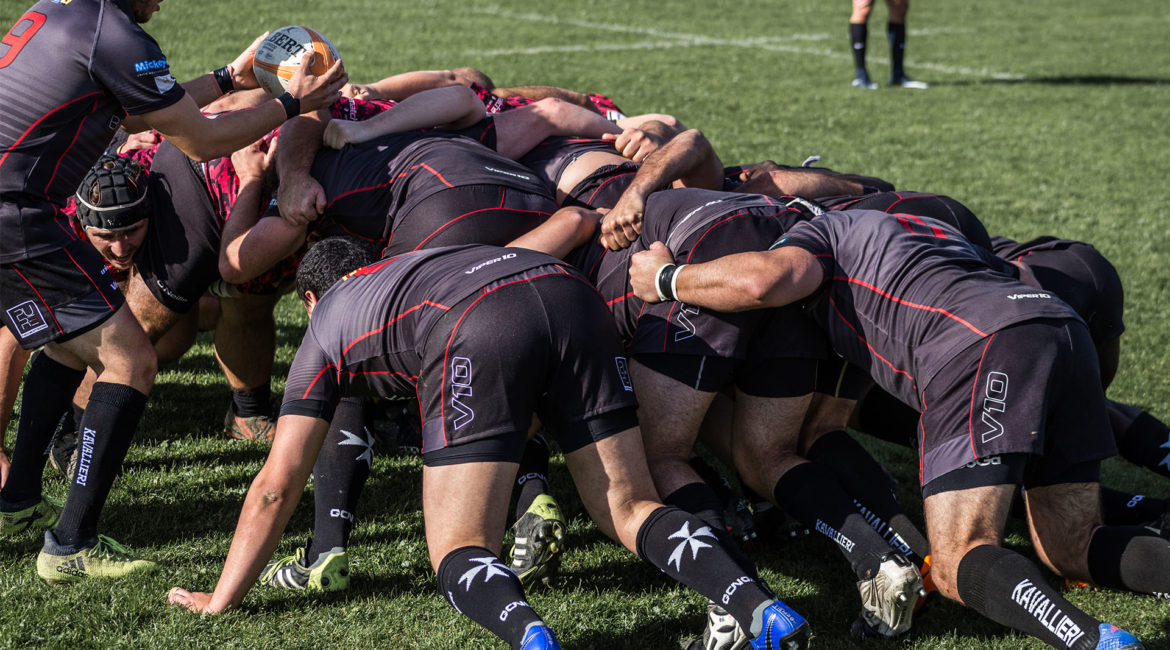 Kavallieri off from a win over Overseas last week fancied themselves in this MeDirect Bank Cup Round 2 game and also noticing that several Stomper’s players were absent they were looking for an upset. That hope kept them alive and keen in the first half, even as Stompers laid siege to their line, they defended with passion putting in some BIG tackles to stop Stompers from crossing their line. Kavallieri did not get out of their half for 25 minutes playing against the wind. The lineouts were a free for all at times as the hookers tried to put the ball in straight at the lineouts. Jordan Heatley (10) was kicking strongly into the wind and trying to get his forwards to run off him, but it was tough going to get his team on the front foot.

Matthew Camilleri (12) scored from quick ruck ball close to the posts for Gruyer(10) to convert taking the lead on the 10 minute mark, with Gruyer running the game at 10 playing smart, Stompers scored again from a close ruck to the line with Mathew Spiteri(5) running off Alexander’s(9) quick ball crashing over in a couple of tackles. With Kavallieri only down at halftime by 12 to 0 against the wind, they thought they were still in with a chance in the second half. To give momentum to their confidence Jethro Zammit Randich(13) ran the blind side from a scrum he then stepped the full back to score wide out a fine individual try, but a minute prior to that he had miscued a quick tap kick that then bounced off him into touch, so he backed himself and gained redemption. Heatley drifted the ball through the posts from way out to bring Kavallieri back into the game at 12 points to 7. But a swing of fortune went Stomper’s way as Heatley was yellow carded for tackling a player without the ball and while he was off the pitch Kavallieri struggled, as Stompers upped the intensity. Gruyer ran through the hole left by Heatley with a cheesy grin on his face, stepping left and right taking the score to 17 to 7, but immediately Kavallieri hit back working their way upfield through penalty kicks, a lineout turned into a maul Jean Pierre Zammit(8) took the ball over the gainline and Jethro Zammit Randich finished it, bumping off tacklers and finally going on all fours to score for Chris Zahra(9) to convert, making it 17 to 14. Stompers sensing a comeback, began to throw caution to the wind and began to run from their own tryline scoring two tries to Cerketta(4) using his strength to bullock his way over, then another with Chris Betts(15) running through the defence from deep and Gruyer running off a pop pass from Spiteri, scored his second try to make the final score 43 to 14.