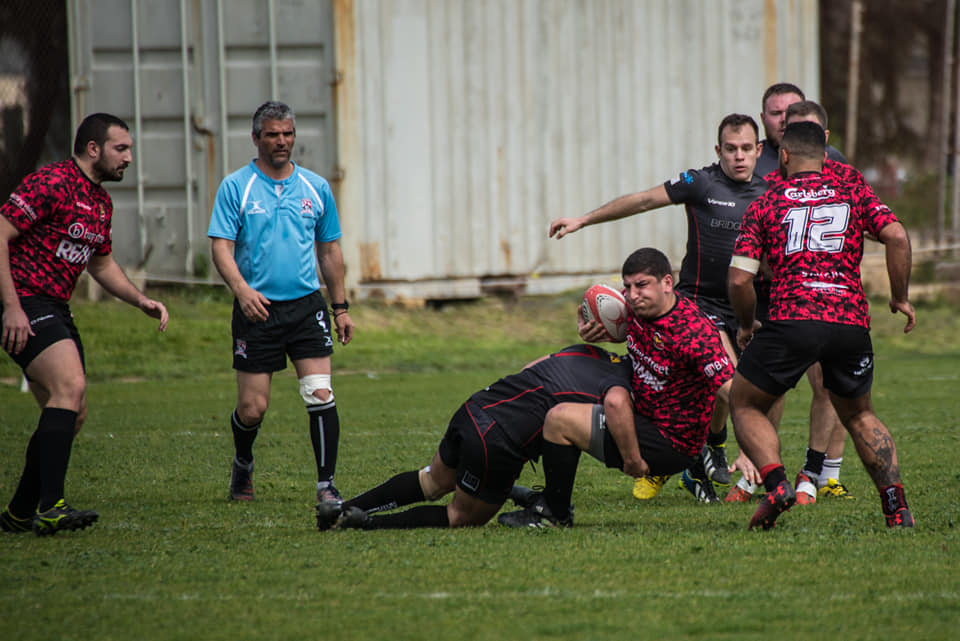 Stompers wear down Kavallieri to take the win.

Stompers Re/Max had to fight hard to win this game against a young Kavallieri team gaining in confidence and skill set, by 38 to 19. It was Kavallieri who started quickly out of the blocks and took the game to Stompers in the first half.
Within 15 minutes they had scored two tries with their forwards winning valuable possession to allow their backs to run out wide with two tries to Mhiriphiri using his speed and power on the wing first to
run around his marker to score and then from a cross kick getting a favourable bounce and bumping
off two tacklers to score in the corner.
The conversions by Zammit Randich(13) had Stompers reeling and trying to get into the game at 14
to 0.
As Stompers increased the speed of the game they began to dominate with turnovers and the
pressure began to tell, finally Avramovic(9) scored as Kavallieri’s mistakes turned over the ball to
Stompers. Attard’s(13) conversion had the score now at 14 to 7.
But against the run of play Zak Borg(14) for Kavallieri, with blistering speed down the touchline
restored both the points differential and the confidence of his team, to make it 19 to 7, midway
through the first half.
But back came Stompers to bring the score closer, going through the phases and putting Malcolm
Attard over in the corner to make it Kavallieri 19 Stompers 12, as Referee Sean Doublesin blew for
half time.
Coach Mario Fountain fired up his team at half time and the second half was all Stompers, as they
laid siege to the Kavallieri tryline with tries to Zanin(8) carrying strongly, Mathew Alexander(14)
running on to a chip kick by Matt Camilleri(12) and speeding away to score and Cerketta bullocking
his way over after a number of pick and goes. With Attard’s fine kicking, converting two of those tries
taking the score out to 31 to 19.
A change of Referee with Sean Doublesin injured, he was replaced by Lionel Da Silva to Referee
the last twenty minutes.
The two scrum halves were competing well, with the feisty Sammy Gichane tackling and running,
trying to get his team going and the smooth service of Avramovic allowing Patrick Satariano(10) to
control the game. It was Avramovic who finished the game on full time, scoring his second try, taking
a ball out wide doubling around and scoring and then with the Attard conversion ending a very
competitive match at 38 points to 19.
Men of the Match:
Stompers: Avramovic,
Kavallieri: Sammy Gichane.