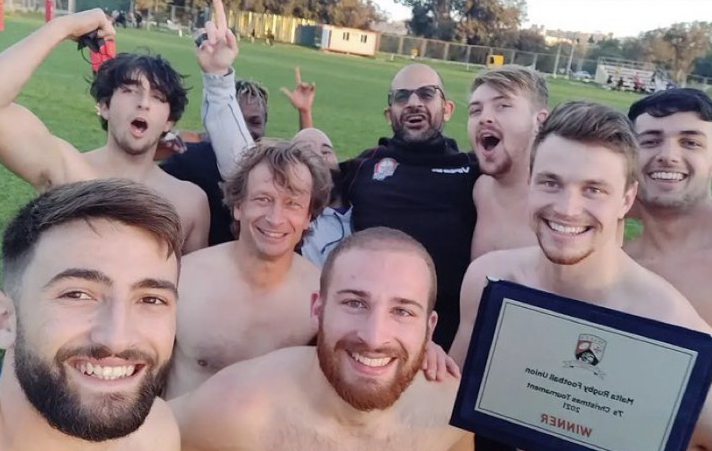 On a beautiful sunny day at Marsa four Clubs rolled out their players to compete in the MRFU organised 7s tournament, as the Fifteens teams take a break for the Christmas and New Year.

7s Rugby as the number indicates, have 7 players in each team playing their trade on a full pitch, but just for 7 minutes each half.

The game is all about movement, moving the ball at pace with players having to cover the ground both in attack and defence, it’s very intense if played with the right structure.

The Clubs represented in Saturday’s tournament were Kavallieri, Stompers, Falcons and the Wolves out of the University of Malta.

As mentioned, the tactics are spinning the ball wide at pace, trying not to go into contact and putting players into space. The speed merchants, like Richard Gum, Brendan Dalton, Matthew Alexander, Sammy Kawara and Edward Boutet were stand out as players, who understand what it takes to break a team down, they pass quickly and back up after passing to keep the ball alive and spot gaps in the other team’s defence and can then break through to score.

Kavallieri on the day were the team to beat as they progressed through the pool games into the final with Falcons.

Stompers and Wolves were competing to go up against them. Wolves in this their first season were playing with energy and enthusiasm, but were knocked out in the semifinal by Kavallieri. Falcons and Stompers had a grand old tussle in the other semifinal, but Falcons edged them by one point to go on into the final.The playoff for third place between Stompers and Wolves saw the most popular try of the tournament with Kurt Sciberras, going by his physique definitely a prop in the 15s game, scorching his way from halfway to score with all the teams cheering him on, as the defence tried to track him down.

Kavallieri were taking the final seriously, warming up prior to the kick off, with the Falcons a bit more relaxed on the sidelines, cheering on the Wolves in their game against Stompers.

As the sun began to set and the shadows got longer, Kavallieri won the final, beating a Falcons team largely made up of forwards, and without the injured playmaker Dalton, by 31 points to nil.