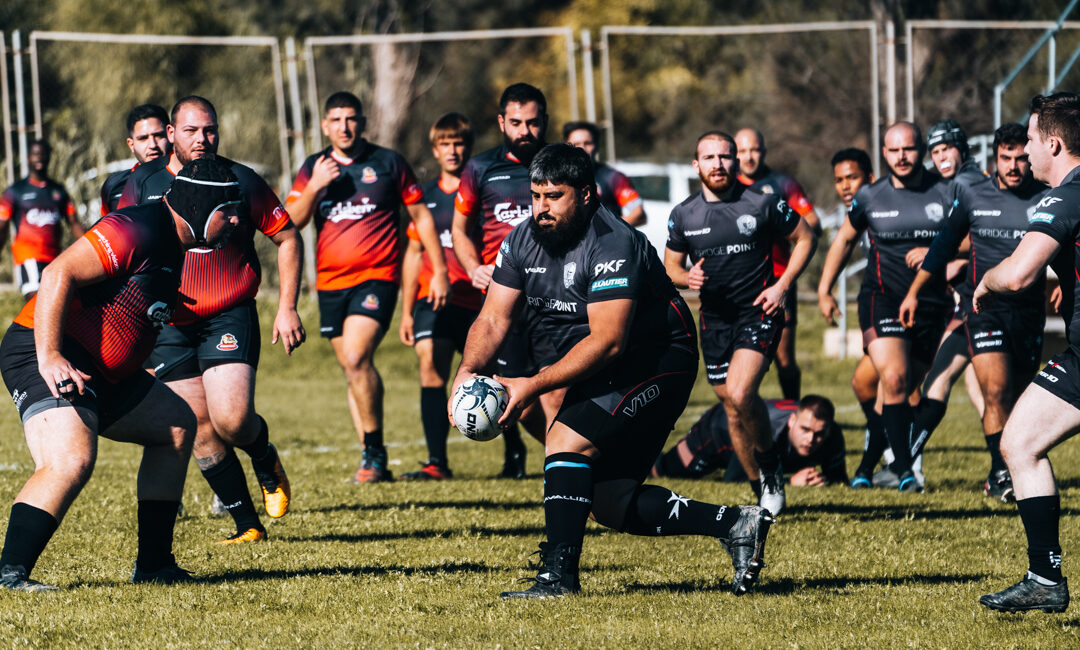 Played in beautiful conditions but with Covid restrictions, so no spectators. This was an entertaining game that flowed backwards and forwards throughout the full 80 minutes.

Kavallieri started brilliantly, putting pressure on from the start, with Stompers spilling the kickoff.

Within 3 minutes the Men in Black were on the scoreboard, with quick ball going wide into the hands of Zammit Randich (13) who dummied passed the Stomper’s fullback to run around behind the sticks to score, Aidan Mallia(12) converted to make the score 7 to nil and Kavallieri were pumped.

Some good carries by Augustin Vazquez(4) and a weaving run by David Namusasi(7) kept Stompers on the back foot. But a scrum tighthead with a big shove by Stompers relieved the pressure. But only for a moment, as the Kavallieri scrum shoved Stompers off their ball in the next scrum. The rangy No 8 Thibaud Boucheix picked from the base of the scrum and broke, opening the defence, the ball quickly went wide with Namusasi(7) steaming into the line, he straightened and ran 20 metres to score under the posts, with the conversion by Mallia taking the score out to 14 nil on 20 minutes and Kavalliri were on fire!

Kavallieri were closing down Stompers space, not allowing them any room to move.But Stompers finally started to gel with Max Galea(9) and Richard Gum(10) switching play from side to side. Ben Naudi(3) and Dragan Cerketta(5) were bashing their way into the game opening up Kavallieri’s defence, then Richard Gum had a dart at the line, but was tackled, with finally Marcos Rubles(11) picking up and diving over near the posts, making an easy conversion for Gum, to make it now 14 to 7 on 25 minutes.

There was a momentum switch as Stompers found their game and went on the attack, breaking down the middle and going wide right, with that man Rubles again going over to bring the scores close at 14 to 12.

From the restart Stompers attacked again, with Josef Busutil(2) and Rubles(11) running hard, moving the ball to Gum out wide to score, putting Stompers in front at 17 to 14 just as the visiting English Referee Tom Read blew for half time.

Within 2 minutes of the restart Clement Gruyere(13) scored, with Stompers on a penalty advantage, the ball went right, with the tall Rubles popping a basketball pass to Gruyere who straightened to go over under the posts. Gum’s conversion took his team out to 24 to 14.

With veteran second rower Joseph Cutajar(21) coming on, Kavallieri lifted their game and pressured Stompers to drop the ball as they tried to run wide, Neil Cutajar(2) scooped the ball up, drew the full back and passed to Namusasi who ran 20 metres to score, making it 24 to 19 with the missed conversion.

But Kavallieri kicked a penalty minutes after to edge closer at 24 to 22.Stompers again put pressure on the Kavallieri line and after hit ups by Daniel Halliday(17) and Cerketta(5) Gum glided through the scattered defence to score under the posts, he then converted his try.Stompers 31 Kavallieri 22.But Kavallieri weren’t finished yet and came back at the Red jerseys, with Joseph Cutajar on the charge, he passed to the fleet footed Edouard Boutet(15) who stepped and passed to Neil Cutajar(2) for him to run the final 20 metres to score, the conversion drifted away, it was now 31 to 27.

It was a game there for the team that wanted it the most!As the players tired, mistakes crept into the game, with a number of turnovers and intercepts and hookers having trouble to hit their jumpers in the lineout.Stompers won another strike against the head as Kavallieri were looking to attack again and an attempt by Rubles to chip and chase inside the Kavallieri 22, that bounced into touch, ending this entertaining game of Rugby at 31 to 27 to Stompers.