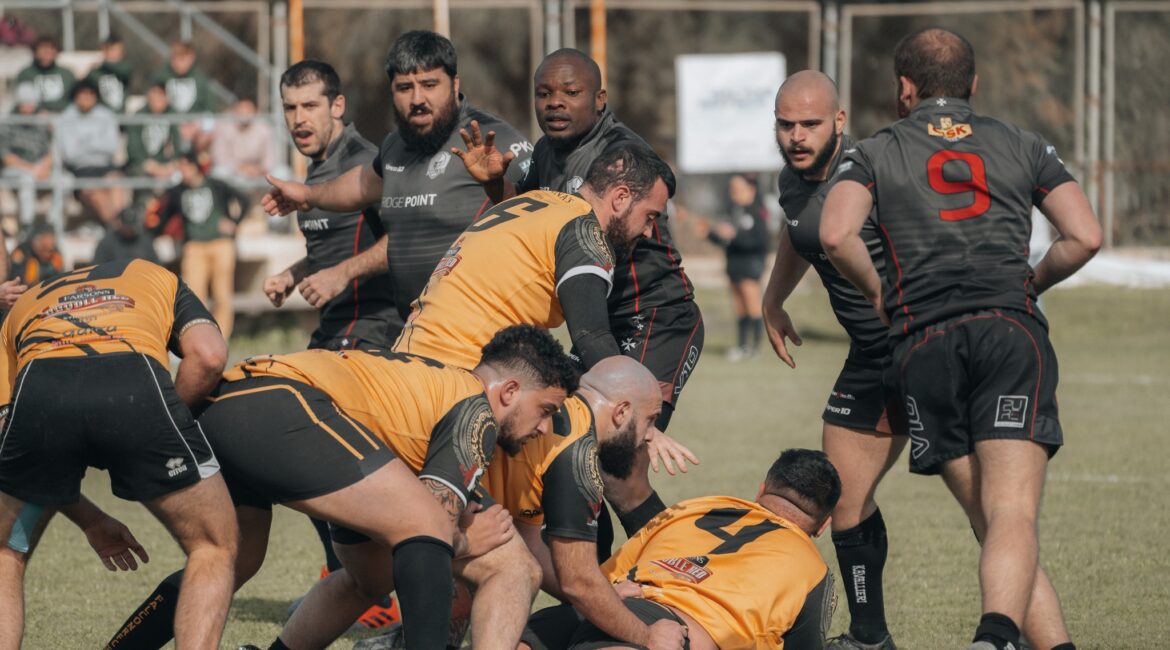 This game was a first for Maltese Rugby, having a young lady Referee in charge of a MRFU Cup game. Ms. Adele Robert from Belgium who Referees at Division two level in her country showed a deep understanding of the game and managed the players and the emotion of the game well.

And this game was an emotional one, with both teams hungry for the win, especially with Kavallieri getting fired up late in the second half.To write up our Rugby games at times, is like trying to predict the lottery numbers on a Saturday, as teams seldom have the correct number sequence, with often the same number being worn by two players, making it difficult for the Media and the Referee as well.

Falcons strode out to a half time lead of 16 to 5 with first 3 penalties to Maxime Mourot’s (10) accurate boot on 3, 11 and 20 minutes and then later a converted try.

Kavallieri were trying to get into the game, but they were making mistakes with poor passing into the wind and they were also struggling to hit their jumpers in the lineouts.

Many times Kavallieri were getting into attacking positions, but then turning over the ball to Falcons. Also with Mouret’s boot driving Kavallieri back downfield, it was frustrating Rugby for the men in black.But finally Kavallieri worked their way into the Falcon’s 22 with both backs and forwards combining, then firing quick ball out to Adrian Dwight Mallia(15) steaming into the line to score out wide, bringing it close at 9 to 5, with the conversion drifting wide.

all bashing their way into the Kavallieri defensive wall, allowing Simon Leymare(9) and Mourot(10) the space to dictate play out wide.

As Falcon’s were building phases and getting close to the Kavallieri line, a head high tackle put Juan Fenech(1) into the sin bin.From the subsequent tap penalty Sven Camilleri(3) crashed over in the corner to take the score out to 16 to 5 with the successful conversion by Mourot.

Referee Adel Robert then whistled for half time.As Falcon’s kicked off the second half, the wind had picked up and it seemed also the energy of the Kavallieri players, as they began to make inroads into the Falcon’s half, with Sammy Kawara now at scrumhalf speeding up the service to his backline.

But for a period Falcons attacked and only a turnover by Juan Fenech(1) saved the day, but Kavallieri’s exit strategy was poor and they couldn’t clear the ball away from their line.

to Gabriel Scicluna(6) and on to Mourot who then crashed over in the corner dragging two tacklers with him.Taking the score out to Falcons 21 Kavallieri 5.

putting him in the bin for 10 minutes for a high tackle.

Falcons scored again from a Kavallieri 5 metre scrum with Ernest Degabrielle(14) now at scrumhalf charging down the clearance kick and Gabriel Scicluna(6) pouncing to score the try, with Falcons looking comfortable now at 28 to 5 with the conversion going over.

But then Kavallieri flicked a switch, with substitutes providing fresh legs and a new resolve, they took the game to Falcons and after a patient build up David Namusasi(7) crashed over.

Making the score now 28 to 10 and a new belief in the Kavallieri ranks.Kavallieri put the pressure on the Falcon’s scrum and won a strike against the head, they then worked their way downfield with Scott Blake(23) scoring out wide edging his team closer at 28 to 15.

Two yellow cards for repeated infringements by Falcons, had both their second rowers, Martin Barbara(4) and Andrea Borg(5) off the field and Kavallieri took advantage, powering up their game forcing Falcons into mistakes and they scored a penalty try from a high tackle on Ryan Felice(11) as he tried to slam the ball down under the posts, after charging his way through three tackles. This gifted Kavallieri another 7 points taking it out to 28 to 22 with just minutes to play, but from the kick off a high tackle gave the ball to Mouret to kick into touch to end this very intense game of Rugby,Also Refereed by at least 30 very biased people(Reserves and Management) on the touchline!