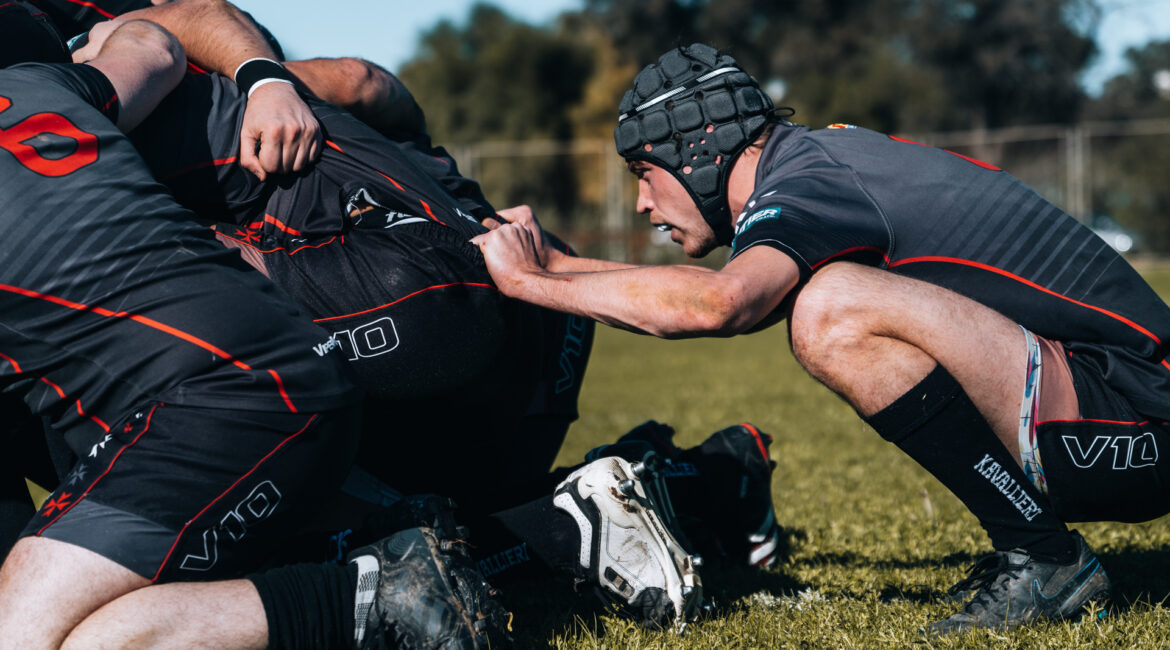 This was an important game for the MRFU League, as if Kavallieri were to gain two points they would win the League, but if Stompers were to win then Falcons would win the competition.

So it was on this bitterly cold, wind swept Saturday at Marsa Rugby Park the two teams did battle.

Kavallieri started with the wind behind them, but it was Stompers who sailed into their half with a strong determination to put Kavallieri to the sword.

Richard Gum(10) with quick ball from Max Galea(9) was instrumental in setting the pace of the game, as he repeatedly took the ball to the line, challenging the Kavallieri defence, or off loaded to his charging Bulls, Dragan Cerketa(3), Matt Spiteri(1) and John Ellul(4) followed closely by his loose forwards, Gary Hili, Marcus Christians and Jon Jon Micaleff. It was an intense start which didn’t allow Kavallieri to play their game.

I was impressed with the confident catch on the kick off by John Zammit Tabone(5) plucking the ball out of the sky high above his head, in probably only his first few games of Rugby.

Kavallieri were forced to play from deep, as Stompers kept them pinned in their half for a good 15 minutes. Jake Pace at flyhalf has a good pair of hands and distributes well, but should have been thumping the ball downfield with that force 8 gale behind him, making Stompers play from deep, also there were no high balls to scatter the defence, instead the Kavallieri forwards and backs were struggling to run it out of danger. Loucy(12) ran a few good lines as did Augustin Vasquez(5) to try to get their team going, but to no avail.

But with all that dominance in territory, it still took Stompers 20 minutes before they scored, after some crash ball near the line with Gum(10), Cerketta(3), Zammit Tabone(5), Hili(No8) all crashing into the Kavallieri defence before John Ellul(4) reached out to score, with no conversion it was Stompers 5, Kavallieri 0.

A few minutes after that score, Referee Mike Mulroy sent Gary Hili(No8) to the sinbin for a high tackle.Open photoA good run by Mariano Cutajar(11) blitzing his way down the touchline looked promising, but a dropped ball ended the move. Jon Jon Micaleff(6) put in a scything tackle on Edouard Boutet(13), just when it looked like he would launch an attack.

Kavallieri began to gain traction with the high work rate of the rangy Thibaud Bouchiex(No8), David Numasasi(7) with Sammy Kawara(9) sniping around the edges and the speed of service to his backs, a forward interplay close to the line, allowed Augustin Vasquez(5) to crash ball and reach out to score, he was pumped shouting to his team “Come On!” with no conversion the score was level at half time. 5 all.

As the second half kicked off, Stompers now had the wind at their backs, there was a flurry of activity to start the half Namusasi(7) was yellow carded on 3 minutes into the half for a late tackle, then quickly Stompers scored three tries to Cerketta, charging like a bull at the line after Kavallieri were penalized several times. Ellul scored his second try after a Cerketta bash came up short, for him to pick up and dive over. Then quick ball through the hands had Roubles(12) straightening to give space to Clement Gruyere coming into the backline from fullback. Which Gum finally converted to take the score out to Stompers 27, Kavallieri 5.

That man Ellul scored again to claim his hat trick.

The game lost its way a little, as dropped passes and infringements slowed down play and frustrated the crowd, supporting both sides. In that looseness ill discipline crept into the game and Referee Mulroy was right to flash a series of yellow cards to gain control again.

Off went Jeremy Debattista(21) probably frustrated after his try was disallowed when stepping over the dead ball line, after he had done all the hard work to run around behind the posts. Then to Mark Alamango(18) from Stompers and Sammy Kawara(9) from Kavallieri.

All the while the Falcons team and supporters was cheering on Stompers in the hope that Falcons would win the League, if Stompers won this game.

Kavallieri had a spark of life for a brief period and charged into the Stomper’s 22, only for Gum to send them back downfield with some mighty 75 metre kicks into the Kavallieri 22, with the wind, only for the wind to go out of the Kavallieri sails, it was hard toil against the wind.

To end the game Gary Hili(No8) scored from a scrum close to the line, picking up at the back and forcing his way over in the tackle down the blind side.The final whistle started the celebrations for Falcons, as they danced with Joy! (so that’s what her name was!)