Kavallieri defeated Wolves in this last League Competition game of the season. 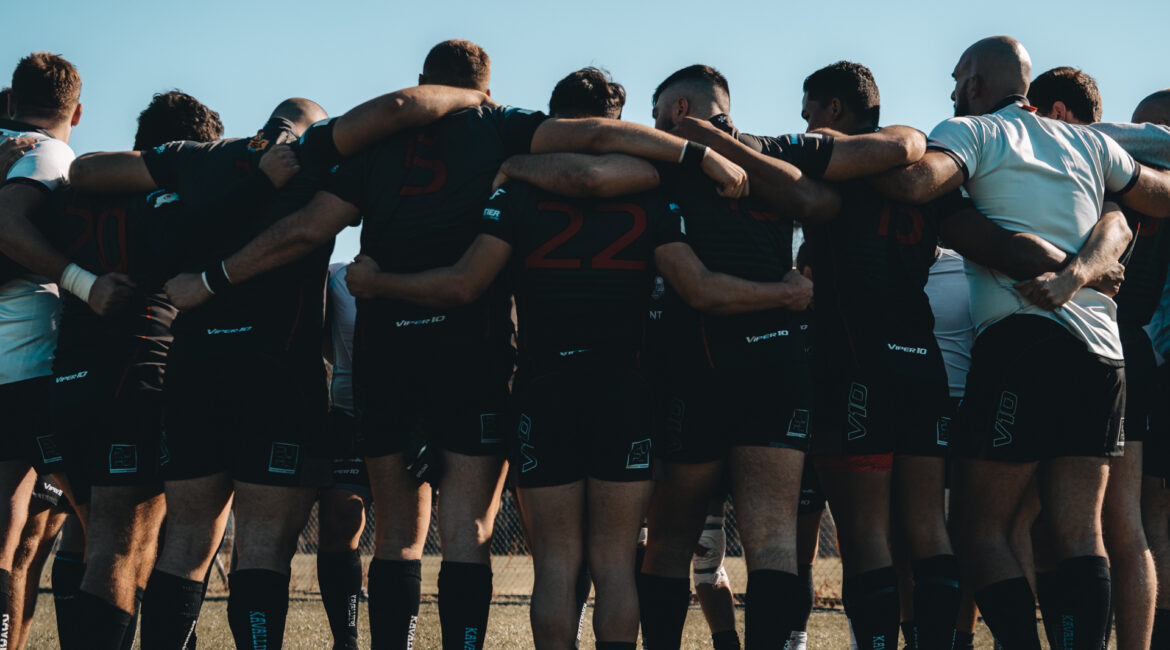 This match between Kavallieri and the University Wolves team was the final match in the League competition and the warm weather was enough to make people debate, that it should have been played “20,000 “Leagues” under the sea!”

It was hitting 22 degrees with no wind, with Referee Sam Ramage (shadowed by Mauro Miceli on the pitch) but that shadow just wasn’t enough to stop Sam’s head from getting sunburnt.

Kavallieri were giving many of their squad game time, with even the 64 year old Brian Miller President of Kavallieri, playing in the front row for a half, pushing his 30 year old son out onto the wing(which he wasn’t happy about).

Although taking the game as a hit out for some fringe players, Kavallieri, still had a tough spine in the team with the likes of Augustin Vazquez(5) David Namusasi(No8) Nathan Zammit(6) Terence Galdes(3) and out the back Jake Pace(10) Conor Patrick Lucey(12) and Jethro Zammit Randich(15) all at the top of their game.

As always, the University Wolves put up a good showing in the first half, with especially Will Daley(9) and Gabriel Seychell(10) working in combination, trying to get their team to lift and take the game to Kavallieri and they did score two tries in the first half to Jordan O’Shea(4) leading the pack and Michael Sant Fornier(15) running from deep, with Gabriel Seychell kicking the conversion, but with Kavallieri, more clinical in their execution of the game plan, leading at half time by 29 points to 12.Even though Kavallieri brought on their reserves in the second half, they still managed to keep the flow of tries going, scoring another three, eventually winning 44 points to 12.

Coach Sean Doublesin ran on in the second half, to show that he may “Talk the Talk” but he wanted to show his team how to “Walk the Walk!”

He showed them how to put the ball into space, not to try and barge his way through defenders, when he had a wing outside him!He showed them how to not get penalized for rolling on the ground, after being tackled and then, in front of his applauding Club Mates, showed them how, if you are catching a “Bomb” it’s better to turn sideways, so if it’s dropped it won’t be a knock on! You had to be there! There were many lessons for his team, the difference between “Theory and Practice”.

Jethro Zammit Randich continued his good form from his time with the National team against Cyprus, showing some deft touches, a few inside balls, running into the line and a neat chip over the top to regain the bouncing ball to score.

Conor Patrick Lucey(12) had a few good runs, straightening the attack and beating defenders, Nathan Zammit(6) toiled all day and always gives his best, he’s a compact muscley player. Namusasi(No8) always leads from the front and keeps his team moving forward, Jake Pace(10) is always steady, although he could use the boot a bit more, or take it to the line, so as confuse the defences as to what he is going to do next , but he has the skills and he is getting there.

It was a game played in good spirits and probably a lot was drunk after the game as well!

Next Saturday the 30th of April at Marsa Rugby Park, there will be visiting teams from abroad with a 7s Tournament for both Men & Women, then a Veteran’s Tournament played with 20 minute halves between four Clubs, then at 4pm there will be a 15s match between a Club from Bristol and the Overseas Rugby Club of Malta.