From the Touchline: Rugby at Marsa 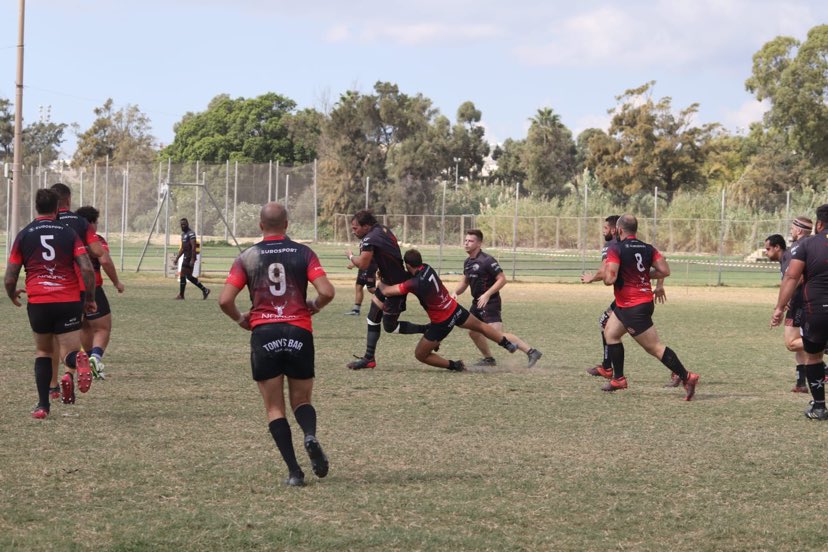 In this first game Stompers ran out the winners by 55 points to 21 over Kavallieri. It was a game played in windy conditions and he who harvests the wind can claim the honours.

Kavallieri with the use of it in the first half never bothered to use it as part of their tactics, instead tried to bash away in an attempt to beat the Stomper’s well drilled defensive line, tiring out their forwards, trying to make them do too much work, from the wrong field positions.

Mariano Cutajar(11) sparked Stompers into life running from deep, down the touchline, scoring with the clock on 5 minutes, from a move that started way back on their tryline.

Ben Naudi(1) then scored from a move started by Robin Cutajar(9) going the short side of the scrum, Richard Gum(10) then carried it forward, before offloading to Naudi who stepped and went over, both were converted by Clement Gruyer(13) and Stompers were up 14 nil after 13 minutes.

Finally Kavallieri got some traction with David Namusasi(No8) scooping up a dropped ball and loping 50 metres to score under the posts to give Jukic(12) the easiest of conversions.

With their tails up Kavallieri scored again, this time from an interception as Stompers were putting pressure on their line, Erik Canova(11) playing his first premier game, swooped on a pass and ran it back 100 metres with Mariano Cutajar in hot pursuit, but he could not catch him. Another successful conversion by Felice(9) taking over the kicking from the injured Vincente Jukic and now we had a tied game at 14 each.

But Stompers had the last say in the half, from a tap penalty going wide for Gum(10) to bash his way through two tacklers to score.

Mariano Cutajar could have scored again, but a crash tackle by Sammy Gichane(22) hurtled him into touch at the corner flag.

Referee Mauro Micelli started the second half with Stompers having the wind at their backs, but a yellow card to Robin Cutajar(9) opened up a gap for Jake Pace(10) to score after turnover ball and a quick pass, put him into space to score under the posts. The conversion was good by Ryan Felice(9) and Kavallieri took the lead at 21 points to 19.

Kavallieri lost two of their hardworking forwards to a head clash, Nathan Zammit(7) and John Van Vliet(4) having to be attended to and taking no more part in the game.

Play continued, but it was all one way traffic as Stompers stretched their lead with tries to Nick Formosa(15) Jon Micallef(7) having a lively game, Mariano Cutajar again flashing down the touchline, Clement Gruyer(13) then threw a dummy pass and went over, Gruyer breaking from the halfway put Gum(10) into space for him to score his second, Gruyer kicked three conversions and Stompers had broken loose from Kavallieri’s shackles, taking the score out to 55 to 21 with the final try to Gary Hilli(No8) ending the game.