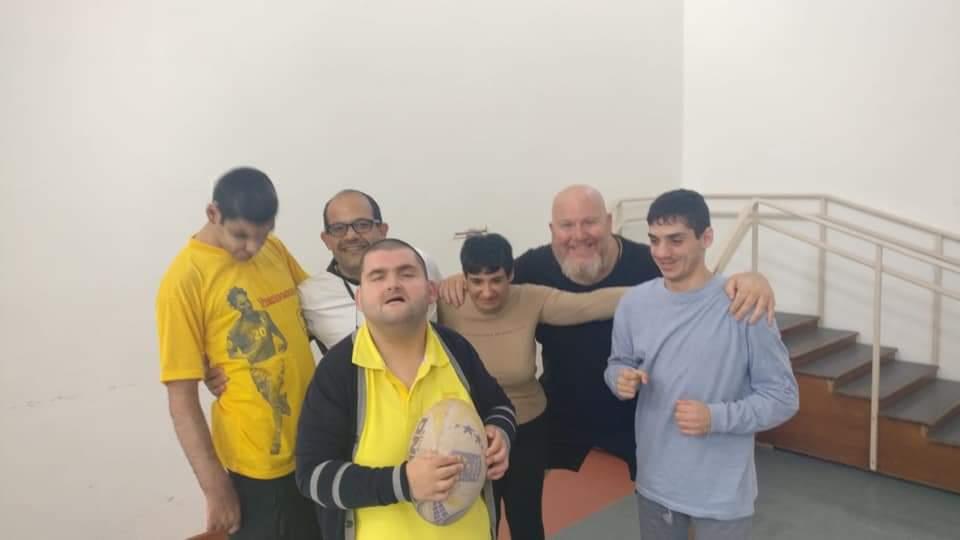 Rugby may be regarded by some as being an aggressive sport, but the discipline is being used by two individuals as a tool to improve the lives of people with physical and mental disabilities.

Chev. Marco Ortica, the president of an international NGO known as The Brain Foundation, together with the club manager of the Kavallieri Rugby Football Club, Tony Sammut, established diverse projects in order to help people with physical and mental disabilities of all ages.

They make use of rugby as a tool, to help the ‘athletes’, as Ortica puts it, approach their life in a different manner. With rugby they are able to teach them integrity, respect, solidarity, passion, discipline, team spirit and commitment. Core values that are not only taught for the sake of the game but are also taught to be applied in everyday life. Rugby is considered to be the parable of life, Ortica said.

Sammutand Ortica told The Malta Independent that they are currently working on several projects held at d-Dar tal-Providenza, at the Hellen Keller Resource Centre in Qrendi, at St. Margaret College Fortini Learning Support Centre in Birgu, at the Guardian Angel in Hamrun, and also projects supported by AgenzijaSapport and the Karl Vella Foundation. Ortica said that apart from these they are working on other projects.

Ortica explained that this began after his experience in Syria back in October 2018. He said that through his foundation, he visited Syria for ten days to help children recover from post-traumatic stress disorder due to the war. Giovanni Malagò, the president of the Italian Olympic Committee, sent five rugby balls to Ortica and he decided to take these balls with him to Syria, and for the first time, introduce a rugby session to these children, he said. He was impressed by the children’s reaction as some of them had no recognition of what a ball was as they had never seen one in their life. They spent ten minutes inspecting the ball before even touching it, he said.

When he came back to Malta, Ortica proposed to Agency for the Welfare of Asylum Seekers

(AWAS) to use rugby as a tool to help anyone in need. This was immediately accepted, and rugby sessions were put into motion on a weekly basis. This project was also proposed to the Minister of Education and Employment, EvaristBartolo, to start this programme and help children with mental and physical disabilities.

As a parent, Ortica briefly spoke about a conversation he had with his two daughters, which further reaffirms that what he was doing was the right thing to do, he said. Ortica asked his children, “What do your classmates with special needs do during break time or during a P.E. lesson?” and they said, “Nothing.”

One the main objectives of their project, which is delivered through what is referred to as the Marqos Method, is to avoid the situation that is present in his daughters’ school, by using rugby as a tool. He said that as a society we should consider and treat these people as a social resource, not as people who have a mental or physical disability. Their aim of this project is to eliminate the title ‘disabled’ and to offer them the opportunity to change the way they approach life, he said.

Ortica spoke about one of the main projects that is in motion with the residents at d-Dar tal-Providenza in Siggiewi. He said that rugby sessions are held once a week on Saturday’s for an hour and a half and all residents are welcome. These rugby sessions allow the residents to experience something different and push themselves both physically and mentally, in ways they never imagined.

At first this was not accepted and only a few residents joined in the sessions as some struggled with such a change, however by time the number of residents taking part increased, Sammut said. With the continuous help of the carers and ability promoters, they helped the residents both during and outside the sessions. Both Ortica and Sammut, said that the help of the carers and ability promoters is key to improve the situation these people are in.

This project has been going on since June of 2019, and since then the residents have greatly improved both mentally and physically and have also made an improvement in interacting with other residents. The sessions include exercises which are as simple as passing the rugby ball to one another or even walking with the ball in hand at their own time. Ortica andSammut said that from these sessions they have seen a great change in some of the residents. The most astonishing improvement was seen with one particular resident who heavily depended on his walker aid due to his disability, they said. However, through these sessions, Ortica andSammut, pushed him into eliminating the walker and walk with the ball in his hand by himself, for even a few metres.

As long as the resident had the ball in hand, he was capable of completely removing the walker aid. Sammut said that he witnessed yet another improvement in another resident who before these rugby sessions was heavily dependent on the people around him. As the resident attended these weekly sessions, he has now changed his approach and makes the effort to be independent in his own way. Both Ortica and Sammut hope to see other residents improve and change the way they approach life, they said.

Unfortunately, for many, rugby is considered to be an aggressive sport. However, Sammut strongly stated that the sport is centred on putting the safety of the player above anything else. There are strict rules that are taught and need to be followed, Sammut Said.

Ortica andSammut said that their motto for this project is ‘0% stigma, 100% stamina.’ Ortica continued by sharing his idea on a project that they are currently working on right now. For the first time in Malta, they would like to organise a mixed abilities rugby tournament with the hope to see other organisations, and eventually other countries follow their footsteps and help people in need approach life in their own way, he said.

This is not simply a story about the projects developed by the Brain Foundation, but it is greatly centred on learning how to give an opportunity to those in need and allow them to not only change the way they approach life, at their own pace but to also become independent human beings.